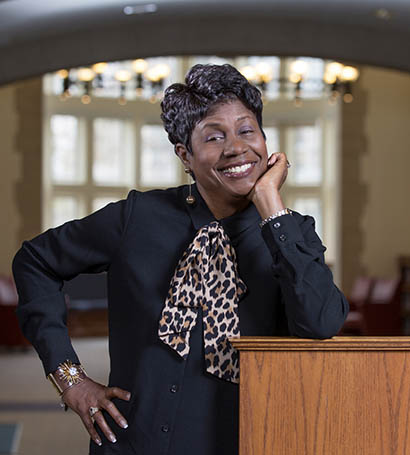 Theresa Hopkins-Staten
President, Eversource Energy Foundation and
Vice President, Corporate Citizenship and Equity
Theresa oversees the company’s foundation and is responsible for community-related employee engagement and development opportunities.  She has developed a strategy to invest in initiatives and organizations that provide broad, meaningful, and sustainable impact in communities served by Eversource. She was named Vice President, Corporate Citizenship and Equity in May 2021, and leads Eversource’s new enterprise-wide focus on Pro-Equity, which is defined as: engaging all stakeholders, including our customers and communities with respect and dignity while working toward fair and just outcomes; especially for those burdened with economic challenges, racial inequity, negative environmental impacts and justice disparities.

Previously, as the Connecticut Director of Regulatory Affairs, she was responsible for developing regulatory strategies and monitoring internal practices to ensure compliance with regulatory decisions, interfacing with the Public Utilities Regulatory Authority and other consumer advocate agencies and providing appropriate communication and guidance to management and business partners responsible for submitting required regulatory filings. She also directed the oversight of escalated customer complaints for Eversource in Connecticut and western Massachusetts.

Theresa began her career at Eversource in the Legal Department as Senior Counsel and Assistant Corporate Secretary.  After practicing law for several years, she became President of the Company’s foundation at that time and Director of Corporate Community Relations.  In these positions, Theresa and her team developed programs to assist limited income customers, and strategically invested millions of dollars in Connecticut, western Massachusetts and New Hampshire on initiatives aligned with the foundation’s focus areas.

Theresa earned a Juris Doctor Degree from the University of Connecticut School of Law and received an Honorary Doctor of Humane Letters Degree (PhD) from Goodwin University.